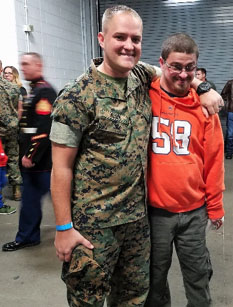 Every once in a while I come upon a great human-interest story, and this is one of them. A few months back I had the pleasure of featuring a very special, special needs young man named Anthony Pedersen, for his courage and determination in helping Zach’s Place – a respite care facility in Colorado Springs, CO, move the city to post signs warning drivers to “slow down”. For his courage Tim Tebow, who had heard about Anthony’s work, offered him an opportunity to visit Bronco Stadium, as a reward. But we all know what happened to Tim that year – don’t we? However, Anthony did get a large framed poster signed by Tim, but never got to go to visit the stadium – until now.

His grandmother, “Janiece Carlson” shared with me, “this year Anthony had two of his wishes come true. Even though he cannot play regular football, due to his disabilities, he can play Flag Football, and does. Anthony recently led his team, the 719ers, to victory as they played in the Special Olympics Regional – winning all their games”!

“Anthony is the biggest Bronco fan”. His older brother Darrin new this, and about his wish to walk on the field the Broncos play on. So, Darrin – a United States Marine, who is stationed in Kansas and recently received a promotion, was asked by his commanding officer where he wanted his ceremony to take place? He stated, “on the 50-yard line at the Bronco’s Stadium in Colorado”! Well, they granted Darrin that opportunity, along with 7 other of his Marine Corps buddies.

October 2nd, the Marine Corps flew Darrin and his buds in a Chopper to Mile High Stadium so Anthony could see his older brother pinned for promotion, and fulfill his original wish – to walk on the 50-yard line at Bronco Stadium, a dream he has had since age 5! Not only did this courageous young man get to see his brother, whom he had not seen in over a year, but he also got to meet the headman in charge of Bronco Stadium! Of course, no Broncos were there as he would have hoped, because they practice in Boulder, and of course was the reason why the Marines were able to have their ceremony at Mile High, and Anthony was able to fulfill his wish.

His Grandmother shared with me , “Just because someone is Special Needs, doesn’t mean they cannot have some of their hopes and dreams come true. It means that people they love – and love them, can make it happen!”